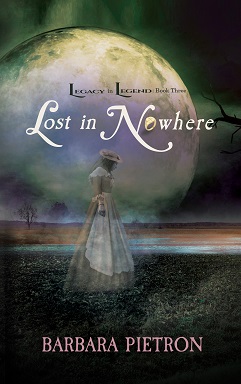 Not all dreams are meant to be followed.

Although Jeni has fully accepted her spiritual ability, she’s unnerved by the apparition of a pioneer girl asking for help. But as the girl’s tragic love story unfolds in her dreams, Jeni’s resistance melts and she resolves to save the soul of the ghost’s lost love.

Jeni dreams through the eyes of the ghost girl, Marielle, experiencing the ill-fated turn of events firsthand. When she discovers that her own impulses cause Marielle to act uncharacteristically, Jeni believes she can change the past. Despite warnings against meddling with time, Jeni forges ahead, convinced she can use the dreams to find the moment where the soul of Marielle’s lover might be saved.

Deep inside a dream and intent on her quest, Jeni is lured into a trap which binds her soul to the ghost girl. If she can escape the evil force that tricked her, she’ll still need to figure out how to return to the present. With no allies, no knowledge about crossing through time, and limited 18th century resources, Jen is terrified by her prospects. Failure will leave her soul trapped in the past, or worse… lost in nowhere.