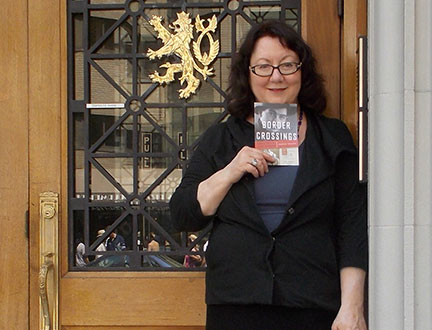 Editor’s Note: MIPA members are always looking for innovative ways to market their books. Rachel’s press release below shows one benefit-driven idea: building a literary tour around your book. It requires work and lots of cooperation among the various parties—author, publisher, bookseller—but it offers the beauty of interactivity with readers. And that sells books. Read Rachel’s press release and think about how you can craft your own tour.

DETROIT: Looking to go on a trip that will affect you in some profound way this summer? Then you may want to give literary tourism a try. This is a type of cultural tourism that deals with places and events from fictional texts, as well as the life and times of the book’s author.

For years tourists have been flocking to places like the Ernest Hemingway House in Key West and Mark Twain’s childhood home along the Mississippi. Literary tourists also like to visit Henry David Thoreau’s cabin and the Dr. Seuss Memorial Sculpture Garden in Massachusetts. And now thanks to a partnership between indie publisher Ten 21 Press and indie bookstore Source Booksellers on Cass Avenue, the city of Detroit has a new literary tour of its own.

Ten 21 Press publisher/Detroiter Sandra Novacek and Detroit architecture blogger Jonathan Peters will the guides on the next “Book Marked on Cass Avenue: Talk + Walk,” scheduled for July 24, beginning at 11:00 a.m. The event is being held in connection with the City of Detroit’s 313th birthday festivities. “This tour covers a slice of history of Detroit’s Cass Avenue and selected landmarks from Willis to Old Main with a literary twist. Participants will learn about the early architects of this amazing avenue, hear the magnificent stories of buildings and tales of notable residents, discover who the streets are named after and experience what this vibrant area is like today,” said Novacek.

The inaugural tour was held as part of Lit in the Mitt Month, a celebration of the literary arts in Detroit. Charles’ widow, Sandra, first talked about her husband’s life, read an excerpt from the book, then led attendees on a walk down historic Cass Avenue. She and the tour guide who accompanied her talked about the history of the street and its many landmarks, including Novacek’s home, the historic Venn Manor, where between the years 2000 and 2007 he wrote his book. The tour also stopped at Old Main, the Wayne State University building where the Czechoslovakian immigrant learned to speak English.

“Independent publishers and independent bookstore are both looking for ways to market to their local audiences. This is one way to reach out and provide them with an opportunity to learn more about their store and books. It was fun and it really did work out,” said Sandra Novacek.

Border Crossings: Coming of Age in the Czech Resistance is Charles Novacek’s first person story of survival amid the Nazi and Communist occupations of his Czechoslovakian homeland during World War II and the Cold War. Since the book’s release in 2012, it has been a winner or finalist in 14 national and international book awards. The book won a gold medal in the memoir/autobiography category of the Midwest Book Awards and a bronze medal in the world history category of the Independent Publisher (IPPY) Book Awards.

In addition to being well liked by readers, the book has also served as a good example of a lot of the things authors and small publishers can do to promote their books.

Getting the Word Out

With so many titles on bookstore shelves and available online, the only way to move books is for authors and publishers to inform their target audience(s) of their availability. In addition to participating in Lit in the Mitt Month, Novacek has also hired a publicist who has secured numerous stories in the news media. She has reached out to Czech and Slovak organizations, and she has used her connections with public libraries to arrange illustrated talks on the book and public exhibits of her husband’s artwork.

This summer, Novacek will be an exhibitor at the Ann Arbor Book Festival and Detroit Eastern Market’s new Sunday Street Market. Another Cass Avenue tour is set for July 24, the city of Detroit’s birthday.

Novacek has also partnered with her local bookstore, Source Booksellers on Cass Avenue, in multiple ways. In addition to putting together the literary walking tour, she has also worked with storeowner Janet Webster Jones to develop panel discussions for university students and the general public. Last year Novacek and Jones collaborated to create the bookstore’s first “Local Author Round About,” a special event held on Small Business Saturday, the Saturday after Thanksgiving,.

“The event’s purpose was to encourage members of the community to come in and support local authors by mingling and talking about their books. It was a really big event. We had nonstop traffic through the store the entire day,” said Novacek.

Over the years Source Booksellers has earned a reputation in the community for regularly participating in events like “Book Marked on Cass Avenue.” Owner Janet Webster Jones says it’s extremely important for the literary arts to support the community. “We also sponsor an annual poetry workshop, we invite students at the local college to use the store for programs and we also partner regularly with the group, Literary Detroit,” she said.

Border Crossings: Coming of Age in the Czech Resistance has been endorsed by Madeleine Albright, former U.S. Secretary of State, who calls the book, “the well-told and dramatic story of a young man whose comfortable life is abruptly transformed by the savagery of World War II.”

For more information about the book, visit www.charlesnovacekbooks.com.